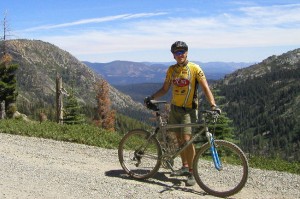 You could probably say I was addicted to riding. In the ’90s, I rode a lot – generally 4 or 5 days a week during the summer and over 5000 miles per year. I consider myself to be a mountain biker more than a roadie, but I have spent a bit of time on road bikes also. This has all calmed down some, as I have become more active in kayaking and travel, but I still enjoy getting out for a good ride.

I used to race a lot for about 5 years, between 1996 and 2000. Most of the racing was mountain bike cross country or endurance events, but I also tried cyclocross, road races, observed trials, and even as part of a team at a triathlon.

It all started in 1996, when on a whim I entered the Sea Otter Classic, and placed 16th out of 200. After that, I became hooked on mountain bike racing, and spent the season racing mountain bikes in the Beginner Class. I did quite well that year, making the podium (top 3) twice and scoring in the top 5 a few more times.

In 1997, I upgraded to Sport Class. The competition was a little bit tougher, but the courses are usually longer (which suits my strengths better). I was able to score in the top 10 consistently and in the top 5 about half the time.

1998, I upgraded again to the Expert Class. This time, the level of the competition is a lot higher and at best I was hoping for was to place in the top 10 at a race or two. Well, my expectations were off in that I couldn’t even do that… I have a race report online for the 12-hour Hell of the West race, which I did that year.

1999 was a better year. Still back of the pack in Expert class races, but I did a few singlespeed races in the spring, a couple of road races in early summer, and then started doing the endurance events. This was all leading up to my entry in the Leadville Trail 100.

In Leadville, I placed 158th out of about 662 registered, with a finish time of 9 hours 43 minutes (race report). Good enough to score a large silver belt buckle (but not good enough for the huge gold and silver belt buckle – that takes finishing in under 9 hours). It felt great to finish. I had put so much into this race with training, taking 2 weeks off to travel to Colorado and acclimate, etc. It would have been very depressing to not have finish (which happens to about 1 out of 3 entrants). 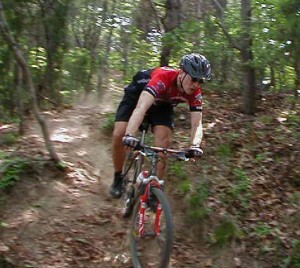 ed a few of the Surf City Cylocross races that year. This was my first time doing cyclocross and it was a blast. I was in second place overall in the C class after three races, but hurt my back and couldn’t race the fourth. This caused me to drop to 5th overall for the season.

I never quite got myself psyched for racing and training since 2000. Since then, I haven’t raced much besides a few singlespeed mountain bike and cyclocross races.

During my racing years, I was a member of a mountain bike racing team called Team Wrong Way. Some of the folks there are pretty serious, but as the name might hint, the main goal of TWW is to have fun.

I’ve also lead rides for the Bay Area Riding Fanatics (like the acronym?), which is not a real group, but a loose knit group of mountain bike riders who like extreme rides. These rides generally have to be at least 35 miles and 5000′ of climbing, but have gone as long as 65 miles and over 12,000′ of climbing. Painful stuff.

In the past, I have been very active in trying to keep the trails open. I do work with both ROMP (local advocacy group, now called Silicon Valley Mountain Bikers) and IMBA (international advocacy group). I was averaging about 150-200 hours a volunteer time per year. Some of my activities were: